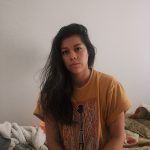 Internalized Gender Roles and its Consequences

This time last year, The Miss Peru 2018 Beauty Pageant [2] was the buzz on all social media platforms. All 23 contestants recited an alarming statistics on the rising violence against women in Peru, rather than stating their body measurements, as customary.

Amongst the tragedies exposed to the public, I wish to highlight three statistics [2] that echoed in my mind while writing this blog post:

In other words: Gender related harassment. Gender related assault. Gender related murder. Each form of violence increasing in its severity and occurrence against women. Stunned by the pageant’s act of positive rebellion, I began ruminating on these statistics and began to wonder: Why is this happening? Can this be stopped and how?

In search for answers to my ever-growing list of questions, I turned to healthy conversation with some of my Peruvian coworkers (both male and female). All of whom shared a similar disheartened explanation for the gender based violence: “Peru is simply a patriarchal and machista society. It’s just part of the culture”.

For context, “patriarchy” [3] takes the form of social organization in which power is held by men. While “machismo” [3] can be defined by an exaggerated and toxic sense of masculinity, characterized by entitlement and dominance.

I’d like to draw your attention away from the potential  root cause(s) of machismo and patriarchy, but rather to the consequences that machismo can have when disguised as culture. I took a course in university called Development Agents: Uncivil Society, who exposed culture is a mere compilation of values and norms that dictate how a community and society should behave, a “mandate to living” per se. Reinforced by the lie that these guidelines are universal and is the sole truth. In the case of machismo, when the model identity of what it is to be a “man” and/or a “woman” is threatened, acts of discrimination against the agitator are often overlooked.  This aggression is justified by working within and perpetuating the“mandate”, or in other words, as the normalization of “just part of the culture”. 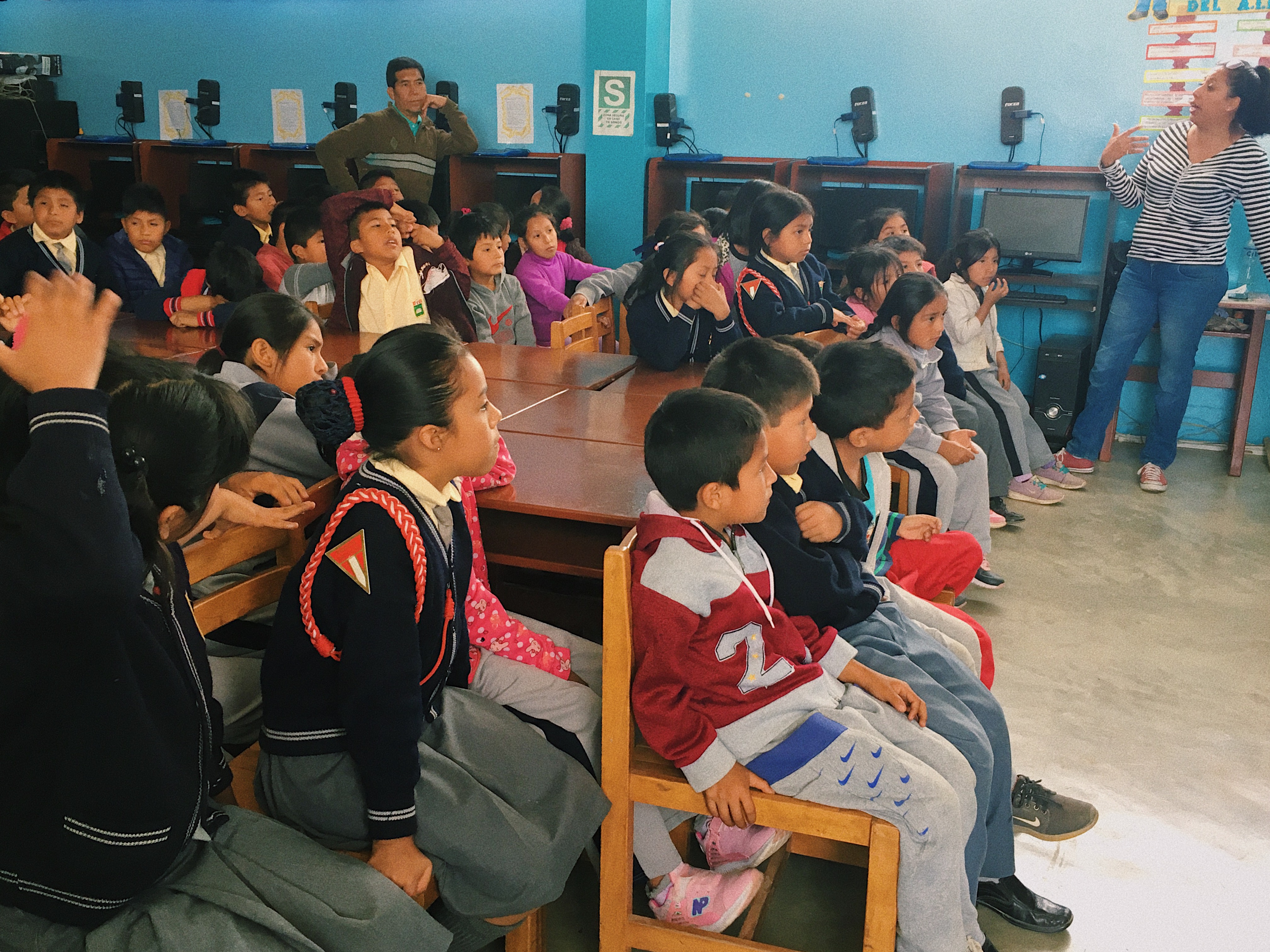 My supervisor Flor Salvatierra leading a recycling workshop to a 3rd grade classroom.

My placement in Peru has granted me the opportunity to work within the NGO Horizonte Corporativo. Based in Ica, Peru, my work consists of teaching grade school students how to care for the environment through organic agricultural practices’ (taught and realized in school’s gardens/orchards) and proper solid waste management (e.g. recycling and composting programs). The students are always eager to go outside and work through the activities we’ve prepared for them. Many of the students have grown up on farms, and are therefore savvy with the gardening equipment and quick to learn new planting/weeding/harvesting techniques. Despite similar backgrounds and capabilities for their age, when we work in the gardens/orchards or play in their courtyards there’s an indistinguishable hum that goes like this:

Despite their young age, their aggressive reactions and statements (against their version of abnormal) proves that machismo lies deep in their culture ’s truth. The abnormality in some of these statements include:

Machismo fosters violence and oppresses all who do not fit the “model” man. Fortunately, machismo is not the universal truth it says it is. Machismo isn’t even a national truth within Peru. In recent years, Peruvian women and men have been challenging the culture they were raised to perpetuate. Numerous movements have stepped up to advocate for gender equality and dismantle machismo through marches, social media platforms and the formations of NGOs. The movement Con la Igualidad No Te Metas (Don’t Mess With Equality) [5] defends gender equality and counter-protests the anti-LGBTQ campaign Con Mis Hijos No Te Metas (Don’t Mess With My Kids) who objected the 2017 curriculum change aimed to improve gender equality in the classroom . The Déjala Decidir (Lets Her Chose) platform [4], advocates for the rights of women to be the proprietors of their own body, in addition to offering facilities that provide safe, legal access to abortion. The 25-year-old Manuela Ramos Movement [6] to this day continues to provide civil, economic, social, political, sexual and reproductive rights support to women in rural environments. The NGO Ni Una Menos (Not One More) campaigns [4] against gender-based violence and has been recognized as the organizers of the largest march in Peruvian history. The issue is deeply rooted and requires to be addressed in all areas of society, however, there continues to be a lag of implementation on behalf of the government, but thats a topic in and of itself. Nevertheless, the take away is that change is underway.

“Is there anything we can do?”, I asked my supervisor in response to the micro-aggressions I was witnessing amongst the students. To which she replied, “We must lead by example”. Her response taught me to never underestimate the power of small, everyday defiance. As a woman, I choose to exert strength and confidence, in my workshops and laborious activities. I encourage my female students to join me by handing them a shovel, teaching them that they are capable. I extend compassion to my male students who shed tears and remind them that there is a great strength in being vulnerable.

The topic of gender equality is not an easy conversation to have, let alone with kids. But it is important and needs to be addressed to ensure the safety and equality of women and girls, and to allow individuals the freedom to develop their own identities. My favorite novelist and feminist, Chimamanda Ngozi Adichie, once said: “Culture does not make people, people make culture” [1]. Reminding me that machismo and its dangerous effects aren’t stagnant, they are but mere values and norms upheld by certain individuals, and can just as easily be overturned with a new set of values and norms. Norms that perpetuate gender equality, one day—and one shovel— at a time. 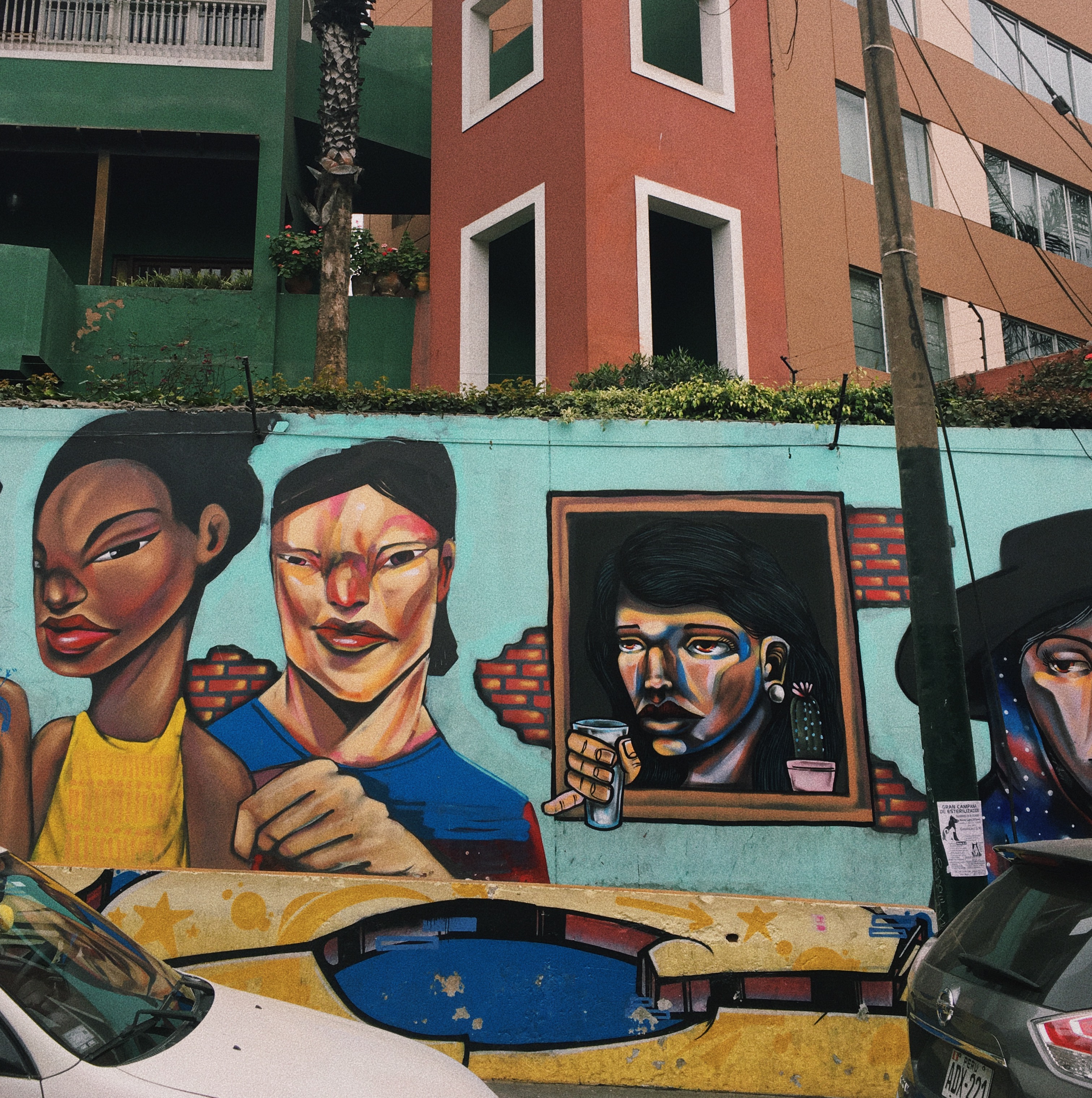 Mural of diverse and strong women found on the streets of Barranco, Lima.

[1] Adichie , C. N. (2012). We should all be feminists. TEDxEuston. Retrieved from https://www.ted.com/talks/chimamanda_ngozi_adichie_we_should_all_be_feminists

[2] Bryant, K. (2017). Give gender –violence statistics instead of their body measurements. Vanity Fair. Retrieved from https://www.vanityfair.com/style/2017/11/miss-peru-my-measurements-are-protest-femicide-2017