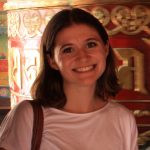 The Polluted Air We Breathe

After several months of living in Kathmandu, I have found that Nepalis are passionate about their country. I constantly receive recommendations from locals on various things to do and see, however, the suggestion I receive the most is to get out of Kathmandu as often as possible. While it is a captivating city, Kathmandu Valley is characterized by high levels of air pollution. The poor air quality has become especially obvious to me due to the persistent layer of smog over the city in the winter months. 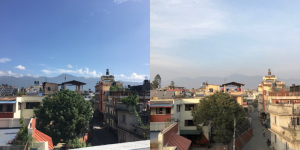 I have discovered that while beautiful, the city’s landscape contributes largely to the winter smog. According to Clean Energy Nepal the valley’s bowl shape limits the city’s airflow. During the winter months, cold air flows down from the mountains and becomes trapped by warm air above, thus, trapping pollutants in the valley. A 2010 article by Tribhuvan University highlighted vehicle emissions/traffic and industrial activities as the main sources of air pollution in Kathmandu. The high vehicle emission levels in the city has resulted from a variety of factors, including a rapid increase in the number of vehicles in the city by 208.49% (from 2000-2010), the high frequency of traffic jams/idling, and the large number of poorly maintained vehicles. In accordance with traffic, poorly maintained roads contributed to poor air quality. Rachana, a Nepali friend of mine, mentioned to me that she has found it almost impossible to drive on her scooter in the city without a mask because of dust from the roads. She mentioned that a great deal is due to damage from the 2015 earthquake and delayed road expansion. In terms of pollution from industries, the brick industry is one of the largest contributors in Kathmandu Valley. With around 100 kilns in the valley, Nepal’s Ministry of Population and Environment found that the burning of coal in production releases toxic chemicals such as carbon monoxide and sulfur into the air.

While trying to understand the health effects from pollution, I came across a study from Berkley Earth, which reported a PM2.5 (particulate matter 2.5 micrometres or less in diameter) of 22 μg/m3 to be equivalent to the health effects of smoking 1 cigarette a day. I decided to look at Kathmandu’s levels from a 2017 Department of Environment report, which stated that  Kathmandu’s daily average of PM2.5 was 226 µg/m3. This daily average indicates that one day in Kathmandu is equivalent to smoking 10 cigarettes. Correspondingly, Nepal’s top causes of death are predominantly cardiovascular and respiratory diseases and illnesses (such as coronary artery disease, chronic obstructive pulmonary disease, stroke and lower respiratory infection). While there are not enough studies completed in Nepal to conclusively state a cause and effect relationship, studies such as one by Toxicological Research have found a positive correlation with the exposure to high levels of air pollution and cardiovascular and respiratory illnesses and diseases.

According to the Janamaitri Foundation Institute of Health Sciences (JFIHS), since the mid-1990s the government of Nepal has developed a variety of environmental plans, legislations and committees (such as the Environmental Act of 1996 and the 2003 Committee on Review of Vehicle Emission Standard and Monitoring Mechanisms) aimed at mitigating air pollution. However, only within the past year with Nepal’s Nationally Determined Contribution (NDC) commitments made under the Paris Agreement, has there been major plans and actions taken. Recent government interventions connected to the NDC include the Kathmandu Department of Transportation making vehicle emission tests mandatory and engaging in random vehicle emission tests. Both interventions are aimed at banning vehicles from the district that do not comply with emissions standards. Having only begun enforcement in June 2018, it is too early to say if the program is successful or not. Additionally, in late December 2018 the government announced plans to buy 300 electric buses for Kathmandu. The anticipated date of operation is mid-April 2019, however without any official actions made and no charging stations present throughout the country, it is unclear when the program can begin.

Due to government shortcomings, non-state sectors have taken the lead in addressing pollution. According to the BBC, private sector actors from the brick kiln industry have taken part in reducing air pollution. After the 2015 earthquake destroyed many factories, 10 factories in Kathmandu have been rebuilt using new technologies that can reduce pollution by roughly 60%. Non-profit organizations such as Clean Energy Nepal engage in research, workshops and public demonstrations such as Maskmandu where nearly 1,000 youth laid “dead” to increase awareness on the health effects of pollution. My own partner organization, the National Federation of Youth NGOs Nepal has educated political leaders on Green Recovery and Reconstruction to aid in environmentally friendly earthquake reconstruction. Additionally, regional actors such as the International Centre for Integrated Mountain Development (ICIMOD) have performed studies and assessments for the government on air quality and increased the scientific understanding of air pollution among political leaders through events.

While the recent government action and civil society participation is encouraging, Kathmandu still has a long way to go in reducing its air pollution levels.